ArchMatrona Georgia Rosenhearth Bonniefire (aka Serene Mother Gigi), of the Lady of Light Chantry, has been developing some lovely customs and traditions over the years.

The Star-tide Rite, as it is known in the Sanctuary Tradtion, is in honor of the Seven Janati known as the Star Guardians in the Lucienne Tradition. This Rite takes place on  28 Astara/Dec. 25, which is also the feast of the Star Fairy, an old Celtic Tradition. 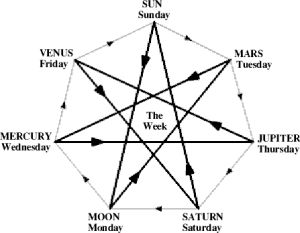 (courtesy of the LLC):

To set up the Star, place seven angel figurines in a seven pointed star formation (heptagram) as depicted above, on an altar or table. Add evergreens, if desired. A prism should be placed in a nearby window where hopefully, the fractured rainbow light will fall on the angels. This reminds us that the Seven Janati are the Seven Intelligent Rays of Dea. They emanate from Her Pure white Light and, as if going through a prism, separate into Seven colored Rays.

Each statuette should also have, around their waist, a small sash (in either their color or white) or even a piece of yarn or cording to which is attached a small silver bell.

Before each angel is placed a small candle or tea light. (If you can find candle colors which match their Ray/sash, great! If not, white will do.)

mini angel ornaments, beautiful stained glass angel ideas, and these are my favorites, hopefully more will be produced.

Small white ceramic angels and wooden angels are also fitting. Use your imagination!

And for children, ArchMatrona Gigi has found this delightful little ebook: book.

We thank Serene Mother Gigi for all these wonderful ideas and for continuing to create Traditions that will surely last for generations.